This is gonna be an interesting post today. I haven’t really discussed this with many people. Only a couple even know details. So… it’s been a pretty secretive project. I’m only still in outlining mode. It’s a very “shush shush” deal. If people heard, I’d be forced to kill them. (Okay maybe not that part.)

I guess I should just say, NOT MUCH IS KNOWN ABOUT THIS PROJECT.

I’M NOT EVEN SURE I KNOW ABOUT THIS PROJECT.

IT’S BEEN A WHILE SINCE WE TALKED ABOUT MY WRITING.

(hold on tight, this is a really long post. XD)

A year ago, I had an idea. It sprung from a line of conversation from my science class, actually. Funny how little sentences can stick with you so much. I don’t really know how long it was, but my writer’s brain was STUCK on this sentence. It was enough to keep it occupied for a good week before it started exploding with ideas.

“Would you exchange freedom for safety?”

And stuck some more.

Let me tell you, ideas that come from that prompt are some of the most intriguing, most interesting, most bold ideas I’d ever seen.

It was proposing a new genre I had never considered before.

It actually made me cringe.

Dystopian is one of those genres that REALLY seems to repeat itself. I mean I don’t know if you’ve noticed but, have you ever stopped to think of how many different books seemed like reruns of The Hunger Games? Like? An astounding amount? So much so that it’s no longer interesting to read?

Okay, that was a sort of tangent. Sorry. But y’all get me? It’s an overused, abused and battered, tired old genre. And it’s even relatively new!!! It’s sad that we’ve already stereotyped it so much.

Can you see why I cringed so hard when it seemed to be forming a dystopian plot?

But after a while of running over the Expected’s with the aid of K.M. Weiland’s book Outlining Your Novel, I had a couple ideas of how to flip the stereotypical plot points on their heads.

(btw if you haven’t read that book, please find a way to do so. It’s amazing and will save your writing. I’m not kidding. 😀 )

So I suppose I should give you guys a little idea of what my new project is?

Mirage of Shards is about awkward teenager Jaxen Flaherty and his search to fix himself and save his friends at the same time. (hint: the poor babe gets to fully find God. Because as y’all probably know, you can’t fix yourself. 😉 )

In a long series of convoluted events, the U.S. government fails and a new empire, The Shard, arises.

Jaxen’s family is affected and I’m not going to say why or how much because Y’ALL SPOILERS but it leaves him familyless.

But he learns to survive on his own. It’s during this time that he grows distant from God. He never was close to Him, to begin with, but then he starts thinking that God took away his family on purpose. Then he starts just ignoring him altogether.

Until he meets a villager who is an elderly veteran.

The guy kinda places this seed in Jaxen’s heart that festers for the rest of the story.

Soon after the encounter, Jaxen gets captured by the Recruitment Services. He had avoided them for years, but they finally find him.

They force him to join the X Gov. Regime and he gets shipped off to the training center in the middle of nowhere. Basically, just the dead wastelands that surround the city.

In this camp, Jaxen meets Kai, the kid who’s kinda a jerk but deep down just wants to do well and survive. They don’t get along well, (well duh we gotta have some peer aggression) and it’s a real pain for Jaxen.

In addition to Kai, he meets three other kids on his squad. Coran is a sweetheart but is literally the physical embodiment of social idiocrasy. Zarah is a subtle genius and looks adorable, but probably could and would murder you in your sleep. And finally, Artemis Griffiths.

Oooh boy, I love this character so much.

Artemis is the ultimate hard-core, kick-butt, “I swear I’ll kill you if you even breathe at me” type girl. Think Astrid from How To Train Your Dragon mixed with Merida from Brave, then multiply it by Rey from Star Wars, and then add Padme Amidala as a side dish.

There you go. Artemis.

Basically, she won’t stand for anyone’s crap. She will take you down, and will not apologize. She has soft spots as we will discover, but the appearance from the outside, she will kill you. And Jaxen takes a small liking to her, believe it or not.

But anyway, Jaxen arrives and training commences with each teen trying to wind up on top of the class.

If that’s not enough, things keep happening that push them further and further beyond schedule. I’m not going to say anything more right now, because I want y’all to be excited and read it when it’s done. 🙂

So here’s the part where I show you guys the character collages so you can get a feel for their personalities (please note: these images are not my own.) 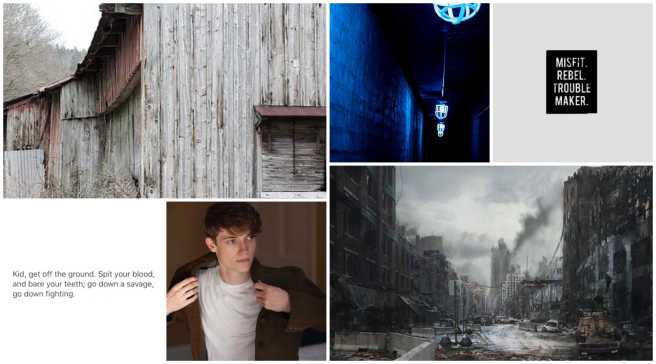 Jaxen ^^^ – he’s a pretty street smart dude. He’s also pretty confident. But deep inside there’s a nagging anxiety that he’ll never be good enough and that he never was good enough. Not even for a family. There’ll be a new nagging after the meeting with the veteran, but for now, it’s just anxiety and self-doubt. He’s got blue-gray tones in his aesthetic. 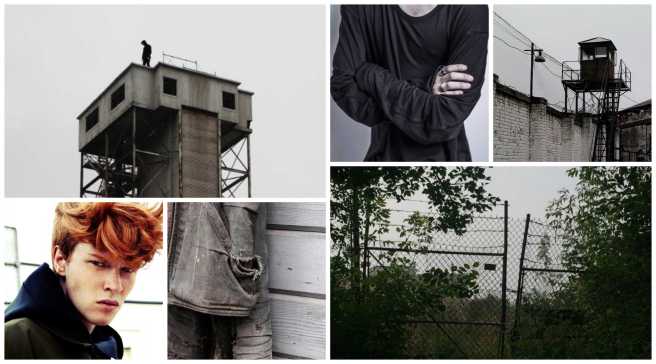 Kai ^^^ – This might be my favorite collage. The coloring and images just really capture this one’s heart and mind. He has firey red hair, but inside everything is dark green and grey. He’s a broken kid. He just needs love, no matter hard that may be to believe, judging from his attitude. He’s alone, like most of the kids in the center, but he’s alone inside too.

Coran ^^^ – I love Coran. He’s gonna be so fun to write. He’s like a loyal dog, but he truly is an idiot. He will do everything in his power to keep his friends safe and he’s good at weaponry and battle. Coran also is just a pure sweetheart. I don’t really know how else to describe him other than that.

Zarah ^^^ – she’s a pure genius. I mean, she probably could kill you, but she’s awesome. She’s super sweet and absolutely ADORABLE. *cough cough* Coran really notices that one *cough* I haven’t explored her character deeply yet but I’m excited to soon. 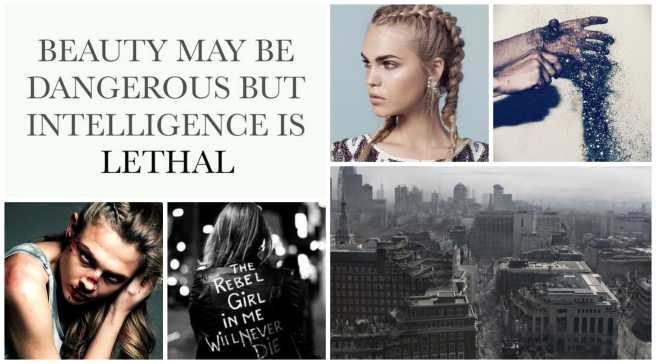 Artemis ^^^ – ehehehehe she is pretty self-explanatory if you scroll back up to the description I previously gave. 🙂

So now that that’s here, let’s talk about my music choices!!!

Obviously, I use my giant writing playlist, and I also discovered a really nice, 2-hour long video with a whole bunch of epic fantasy music. But let’s go with individual selections. 🙂

It’s a pretty dark soundtrack list I got going on… like now that I’m looking at it… XD oh well.

1. Atlas: Four – Sleeping At Last (it’s based on enneagrams and Jaxen is a four so…)

6. The End Is Where We Begin – Thousand Foot Krutch

18. The War Inside – Switchfoot

And of course, I have heavy metal Epic Score thrown in there throughout. (If you are looking for it, the album is Epic SciFi: Fate of the Earth)

It’s pretty great. It’s a loud playlist, but it’s a good one.

A quick announcement before you go; I GOT PUBLISHED ON THE REBELUTION AGAIN!!! *confetti showers* Go check it out!

Anyway, that’s all I have for you guys right now!!!

Now go forth, mis amigos and amigas, and smile. Your day is just beginning. Make the best of it. Don’t procrastinate. Work hard. Make me proud. 🙂

Hello friend! I'm Madeleine; nighttime writer, semi-pro ukulele player, and overall broadway enthusiast. My passion is to summon beauty from words, reach others, and point them back to the Creator. Posting bits and pieces of my humorous wordplay every Tuesday on theintrovertedraconteur.com. View all posts by Madeleine O.

A Little About Me!

Hello friend! I'm Madeleine; nighttime writer, semi-pro ukulele player, and overall broadway enthusiast. My passion is to summon beauty from words, reach others, and point them back to the Creator. Posting bits and pieces of my humorous wordplay every Tuesday on theintrovertedraconteur.com.